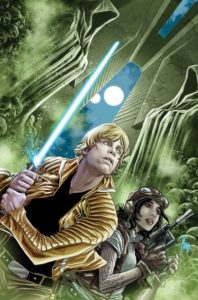 If you’ve got a “Star Wars” enthusiast in your life, you know just how crazy they can get when it comes to anything related to the sci-fi movies! There seems to be a brand new movie coming out every year now but sometimes the wait until that next movie hits theaters feels like forever (for fans). However, a brand new comic book has arrived that fans may enjoy.

This new comic is called “Star Wars Screaming Citadel” and is a one shot. That means it’s just a one issue deal with the story inside. This particular installment is interesting in that it features a well-known character, Luke Skywalker, and a brand new character, Dr. Aphra. She was featured in the Darth Vader comic books and eventually had her own “Star Wars” series come out too.

So major fans of all the sci-fi fantasy folklore will definitely want to check this one out because you never know if it will end up being part of a future film!

Nice lot set of Amazing Spider-man available...Hit the link in bio to check it out! #asm #spiderman #redgoblin #godownswinging #comicbooksforsale

Where to Buy Comics & Gifts

THINGS FROM ANOTHER WORLD

Comic Book Mania is a participant in the Amazon Services LLC Associates Program, Shareasale, and eBay Partner Networks. These are affiliate advertising programs designed to provide a means for sites to earn advertising fees by advertising and linking to Amazon, TFAW.com & eBay.
This website uses cookies to improve your experience. We'll assume you're ok with this, but you can opt-out if you wish.Accept Read More
Privacy & Cookies Policy